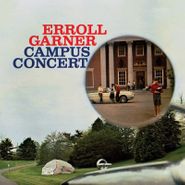 The sixth release in a year long reissue series dedicated to jazz pianist Erroll Garner, Campus Concert was recorded primarily at Purdue University in 1962. The recording not only functions as a historical document of when jazz music held a desirable sway over college students, but as a prime example of the joy that Garner instilled in his playing and performing, be it a popular standard or an original composition. This reissue (as well as others in the series) not only presents the performances in pristine remastered sound, but also includes unedited takes (including Garner's trademark guttural vocal sounds) as well as previously unreleased tracks.