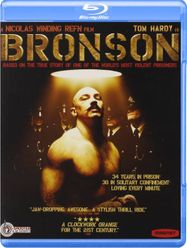 And daddy doesn’t understand it He always said she was good as gold And he can see no reasons 'Cos there are no reasons What reason do you need to be shown? -- Bob Geldof

At age 22, Britain's "most violent criminal" Charles Bronson (Michael Peterson, who initially took the name for his short-lived boxing career and then had it legally changed; here played by Tom Hardy) began serving a 7-year sentence for armed robbery. The year was 1974, less than 2 years after Stanley Kubrick pulled his movie Clockwork Orange from the theaters due to death threats. With the exception of just over 4 months, Bronson has spent the last 35 years as a ward of the state, all but 4 of them in solitary confinement. This extended sentence has to do with his seeming love of violence for violence's sake, something like the performance art of an evil Andy Kaufman. As such, he's a child of Alex de Large, or an Agent Orange -- that is, one whose real life lends itself to Kubrick's satire. Or, at least, that's how Bronson's director Refn takes it (some of Bronson's victims tend to approach his nature a little less abstractly). Therefore, Refn gives us Clockwork Orange's malevolent juxtapositions of barbarity and high-toned culture, gravitas and cornball pop tunes, with a comic book color palette and told through the wide-angled, symmetrical perspective of a demented narrator in clown makeup. Not exactly original, but like Cape Fear was to Hitchcock, livelier than most other films that don't steal from only one source.

In fact, there are enough parallels between Alex and Bronson that telling the latter's life as a remake of Kubrick's film becomes an artistic statement: they share a vocation for ultraviolence; they come from solid, conservative and loving middle class parents; the State has tried penal, psychiatric and even artistic means to correct their moral deficiency; they both show a fondness for art, Alex with his beloved "Ludwig van," and Bronson with his writing and drawing; and they were released back into civilian life despite the questionable success of those corrective procedures, only to rediscover their true calling.

Kubrick's adaptation ends on a downer that Anthony Burgess' original does not because Chapter 21 was excised from the American version that the former had read -- 21 being the age of adulthood in which Alex was to have sought redemption for his youthful sins. That doesn't sound like an ending the cynical Kubrick would've used even had he known about it. Similarly, said redemption finds another counterexample in Refn's protagonist. Despite his size, Bronson never reaches Chapter 21's maturity. In demanding complete freedom for his base desires, he achieves it internally (as he periodically demonstrates to a mental audience) while being socially isolated through the most punitive means his society can offer, a smaller and smaller box. Thus, his repeated demands for harsher imprisonment are shown to be paradoxically a dream of absolute power, a radicalization that doesn't look all that different from complete submission to authoritarian control. Imagine that.

In 1974, a misguided 19-year-old named Michael Peterson (Tom Hardy) decided he wanted to make a name for himself and so, with a homemade sawed-off shotgun and a head full of dreams, he attempted to rob a post office. Swiftly apprehended and originally sentenced to seven years in jail, Peterson has subsequently been behind bars for 34 years, 30 of which have been spent in solitary confinement. Shot from an intelligent, provocative and stylized approach, Bronson follows the metamorphosis of Mickey Peterson, who nicknamed himself Charles Bronson, into Britain's most dangerous prisoner.