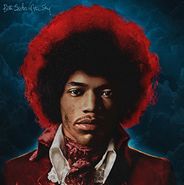 Look, at a certain point, there ain’t gonna be anymore unreleased Hendrix material to be rediscovered, restored, and lovingly presented in collections such as these. Is Both Sides of the Sky the final chapter of that story? If it indeed happens to be, then at least sleep soundly in the knowledge that we got to hear such would-be classics such as “Mannish Boy,” which has an insane guitar solo (surprise!) that works in the theme music from Batman, sounding totally badass and natural in a way that only Hendrix could pull off. Or “Stepping Stone,” which sounds like an ageless blues standard on heavy speed, featuring guitars that whine and taunt Hendrix during the verses. How about “$20 Fine,” a Stephen Stills recording featuring Hendrix inimitably playing that surely has been hidden for so long because it makes CSN&Y sound like nerdy dads? There’s even a Sitar-laced instrumental in “Cherokee Mist,” which firmly reminds you that these sessions were recorded in 1968. There was only one Hendrix and there will only ever be one Hendrix, so do yourself a favor and enjoy what precious little gems of his are left to discover. Your ears will thank you.