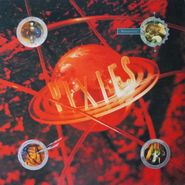 Bossanova, the 4th album by the Pixies, was released in August of 1990. But it was my first Pixies album. Not only was it my introduction to the band but it was also my introduction to the label 4AD. I later got my hands on all the Pixies albums. I fell in love with Doolittle and Surfer Rosa. But Bossanova always remained my favorite. I got obsessed with 4AD in the years that followed, becoming a huge fan of The Cocteau Twins, Lush, Dead Can Dance, Red House Painters, This Mortal Coil & His Name Is Alive. I loved the bands and I loved those Vaughan Oliver album covers! I was super into the vocals of both Kim Deal and Frank Black and really loved everything about this band. They were like nothing I had ever heard before. The album included "Velouria," "Allison," "Dig For Fire" & "Down To The Well." I seriously have this entire album memorized from the first to last song. I know the beginning of the next song before the previous one ends. It was just one of those albums that got inside of me for ever. I love the Pixies forever because of this album. And I can't thank them enough for introducing me to the world of 4AD.