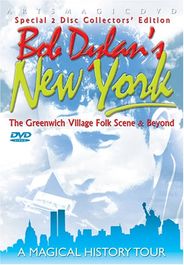 In January 1961, Bob Dylan arrived at Greenwich Village, the very place for a folksinger-poet. The Village had already gained a reputation for Bohemian ways, and had given birth to a generation of beatniks, courtesy of a generation of beat poets, including Allen Ginsberg.

It was in the Village's clubs that the early protest songs that became the anthems of the protest movements were written, and it was here that he honed his craft, playing alongside other legendary figures such as Dave Van Ronk and Tom Paxton.

It was in New York that he was to change his name to Bob Dylan, and , after his conversion to the electric guitar, he was to remember New York in the bitter positively Fourth Street. In this hit song, he replied to the friends that he'd made in the fourth street clubs who had become his most vituperative critics (Bob had also lived on Fourth Street).

The Chelsea Hotel, the Carnegie Hall... these are just two further names without which no attempt to approach the life and times of Dylan would be complete.