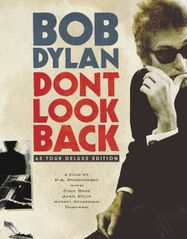 Bob Dylan: Don't Look Back - 65 Tour Edition is the ultimate look at Bob Dylan's concert tour of England in the spring of 1965 - one of the most intimate profiles of an artist ever put to film. This definitive set includes the remastered classic film by D.A. Pennebaker, a brand-new, hour-long look at Dylan, and the original 1968 companion book to the film, all housed in an eye-catching, collectible package. More than just a concert film, Don't Look Back is a window into the spirit of the 60s, and one of the poet-musicians whose words and songs defined it.

This digitally-remastered version of the cinema verite classic follows Dylan on his extraordinary 1965 concert tour of England - his last as an acoustic performer. With unobtrusive camera equipment and rare access to Dylan, legendary filmmaker D.A. Pennebaker achieved an unprecedented, fly-on-the wall glimpse of one of music's most influential figures - and redefined filmmaking along the way.

Forty years after the release of Don't Look Back, D.A. Pennebaker has created this new work culled from over 20 hours of never-before-seen rare footage from his personal archive of film negatives. Raw and unassuming, 65 Revisited provides a fresh perspective of the young Dylan on the road during his 1965 English tour.

Originally published in 1968, the 168-page companion book features a complete transcription of the film, over 200 photos, and a new forward by D.A. Pennebaker. The collectible SUBTERRANEAN HOMESICK BLUES flipbook provides a frame-by-frame look at the film's famed "cue-card" sequence, considered by many to be the first contemporary music video.