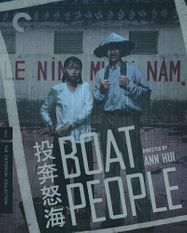 Three years after Saigon's fall, Japanese journalist George Lam (Shiomi Akutagawa)-who'd been evenhanded in his coverage of the Viet Cong-was invited back to chronicle the improvements under the new regime. Feeling that what he'd been presented was staged, he headed in country to find destitution and autocracy-and his sympathies for a young woman (Season Ma) might cost him all, in this controversial effort from director Ann Hui. 111 min. Widescreen; Soundtrack: Cantonese and Japanese; Sibtitles: English; bonus documentaries "As Time Goes By" (1987), "Keep Rolling" (2020); featurettes; theatrical trailer. In Cantonese and Japanese with English subtitles.