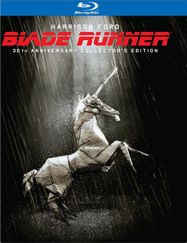 What is “human?” That’s the basic question posited by Ridley Scott’s visionary science fiction opus, release in 2007 in a 25th-anniversary “final cut,” the director’s third pass at the film.

Based on a novel by Philip K. Dick and set in the dark, rain-soaked Los Angeles of 2019, the tale follows “blade runner” Deckard (Harrison Ford) as he pursues and attempts to terminate four “replicants” – genetically-engineered humanoids – who have violently escaped an off-world colony and returned to earth. Deckard becomes increasingly conflicted about his murderous job and doubtful about his own identity, as he falls in love with a replicant (Sean Young) and begins to realize that his prey may be more human than he believed.

Spruced up visually for its third theatrical release, Scott’s feature is still a marvel of production design and neo-noir atmosphere. But it retains its punch thanks to its musing, intelligent script by Hampton Fancher and David Peoples. At the center of the film is Dutch actor Rutger Hauer’s magnificent, risky performance as the rebel replicants’ leader Roy Batty, a complex amalgam of child-like wonder and otherworldly menace who simultaneously inspires terror and pity in the viewer. (The parallels between Batty and Boris Karloff’s archetypal man-made monster are surely not accidental.)

Blade Runner tanked in its original 1982 release, marred by Ford’s now-expunged voiceover narration (added at the last minute to appease leery investors) and crippled by audiences’ expectations of another Star Wars. But the film went on to influence the next generation of sci-fi films – the Matrix trilogy not the least of them – and can be appreciated today as a thought-provoking and dynamic combination of images and ideas.