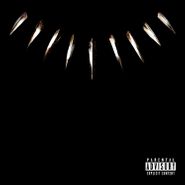 Kendrick Lamar curated the soundtrack for Marvel’s Black Panther, and it’s the most star-studded, heavyweight collection of original material composed for a movie since…hell, maybe ever! Black Panther’s impressive lineup boasts the likes of SZA, The Weeknd, James Blake, Future, 2 Chainz, Vince Staples, Khalid, and not least Kendrick himself on an R&B/hip-hop super album whose credits read as if Spotify’s Rap Caviar playlist came to life. There’s the anthemic melodrama of The Weeknd’s hook on “Pray For Me,” an unabashed chart chaser which is accompanied by the most pop-friendly Kendrick verse ever committed to tape. On the entire other end of the spectrum is “King’s Dead,” a raucous trap song that seemingly features half of the album’s lineup on a single track. Boasting an unconventional production reminiscence of the wilder moments on last year’s DAMN., the track goes from swaggering braggadocio to stone cold menace over a svelte 4 minutes. Most movies release a soundtrack to merely coincide with an event. Black Panther’s soundtrack actually feels one.