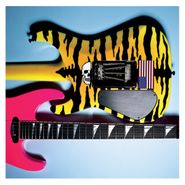 Sleigh Bells hit hard with their first album, a smash of heavy metal guitars, hip-hop beats and Alexis Krauss’ killer vocals, capable of both ethereal coo and cutting scream. Their sophomore album wasn’t bad but lacked staying power, and it looked like they might be destined for the blog-rock graveyard for a while. Krauss and her collaborator, guitarist/songwriter Derek Miller, seem to know this. Bitter Rivals is bigger and badder than anything the band has done previously, starting with the cheerleaders-on-acid title track. “Sugarcane” is familiar territory for the band, coming across as a retooled version of some of their previous singles—everything is pushed to the forefront and maximized for maximum adrenaline—but Krauss holds her own, spitting “beware” with a mix of danger and intrigue. That energy carries over on songs like “Sing Like a Wire,” with synth stabs that would make Andrew WK proud and nods to Michael Jackson. The world of Sleigh Bells seems to be a constant struggle—to maintain relevance, to kick ass and to abolish apathy in the face of their mammoth party jams. Bitter Rivals makes Sleigh Bells’ battle to stay on top a thrilling listening experience.