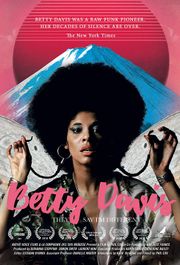 Betty Davis, who is known for her outsized life, fashion, and music in the 1970s, changed the landscape for female artists in America. She shattered taboos, resisting what was considered “respectable” for women by the record industry and society at large, insisting on complete control of her image and recordings, as well as in her turbulent marriage to Miles Davis. At the height of her fame in the early 1980s, she mysteriously disappeared from public life. In late 2012, after intensive research, the filmmakers discovered Betty Davis living a private life alone in Pittsburgh. Director Phil Cox and his team spent four years with Betty Davis to bring the story of her life to the screen and, for the first time, she reveals why she chose to cut herself off from everyone in her past and vanish from the limelight for three decades.