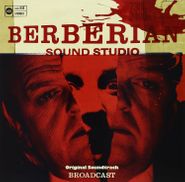 This posthumous Broadcast album is the soundtrack to an upcoming independent film about a sound engineer who loses his mind while soundtracking an Italian giallo film — think Suspiria. True to its background, the soundtrack is full of ominous organ tones, whispered Italian and the terrifying sounds of screaming into madness. This may not sound like the recipe for a Broadcast album, which typically are more subtly haunting works of droning electonic pop, featuring the ethereal vocals of the late Trish Keenan. It is instead more in line with the “in betweens” in Broadcast’s work — the interstitial instrumental tracks, their instrumental collaboration with The Focus Group — which serves to show just how much depth there was (and is) to Broadcast’s work. Though Keenan’s trademark voice only appears occasionally, mostly as wordless breathing over the proceedings, their ghostlike quality further the foreboding tone of the album. Barberian Sound Studio’s dissonant tones and frightening utterances aren’t for anyone, but Broadcast fans (and fans of giallo films and Italian soundtrack kings like Goblin) won’t be let down by the vampiresque sound world created in Berberian Sound Studio.