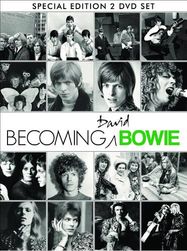 When, in 1969, David Bowie had his first UK hit with 'Space Oddity', at the time it was largely viewed as a moon-landing novelty record and so it didn't take long for the populace at large to forget all about this ""one-hit-wonder"" when the event it was allegedly released to ""cash-in"" on had been and gone. But when, a few years hence, this same performer appeared on prime time television looking like something that might have hijacked the very spaceship he had sung about almost three years before, the hipper viewers sat up and took notice. And those with an enquiring mind would have discovered that David Bowie had been making records since 1964, had already been in more groups and had more images than just about any other performer since the dawn of rock, and following his debut hit, had released three quite remarkable albums.

This 2 DVD set tells the complete, incredible story of the making of David Bowie. From his very first recordings made under his real name of David Jones (with his group of the time, The King Bees) up to the release of his enormously influential breakthrough record Ziggy Stardust and The Spiders From Mars, the entire build-up to Bowie's enormous success is here dissected. Disc one features a 90 minute documentary film which investigates the period in question and features archive footage, contributions from those who worked alongside Bowie through this era plus exclusive interviews, news clips and much more. Disc two features filmed interviews with David recorded at different stages of his career, during which the man himself relays this exciting time from his own perspective. Finished in deluxe 6-panel digi-packaging, this double disc set is destined to become the standard work on this defining period in David Bowie's long and illustrious career.