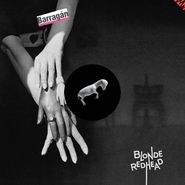 Blond Redhead go deeper into their strange little world with their ninth album and first in four years. The band started as Sonic Youth-inspired noisemakers before shifting their focus to texture and melodrama on the stunning Misery Is a Butterfly and 23, but dialed that all back significantly on 2010’s Penny Sparkle. That trend continues on Barragan, perhaps their sparest and saddest recording. Shed of all the gauzy synth textures of their past few releases, songs like “The One I Love” become more affecting over repeat listens as frontwoman Kazu Makino sings like a lost Tropicalia singer transported to a strange setting of acoustic guitar, harpsichord and shuddering percussive sounds that creak in the background like falling trees. The band occasionally comes off as though they’re still inching toward something, discovering what exactly it is they want to say, but that in of itself can be quite interesting and entertaining (as predecessors like The Breeders have proven), on songs like “Cat on Tin Roof” show, finding Makino unleashing feline yelps over Simone Pace’s Stonesy guitar riffs and Amedeo Pace’s gentle jazz shuffle. Of course, Blonde Redhead are still a stadium-filling rock band, however goth-era Cure they let themselves go, and when they plug in and go for it, as on the skeletal shoegaze workout “No More Honey” or pulsating, krautrocking “Mine to Be Had,” the results are stunning. Barragan is among the band’s artier releases, but fans who have followed the band for years likely won’t mind turning it over and trying to crack it over successive listens. Uncompromising yet uncommonly beautiful, Barragan is endlessly intriguing.