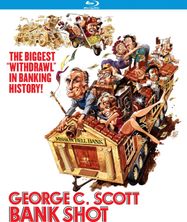 Fresh from his recent jailbreak, criminal mastermind Walter Ballantine (Scott) is already plotting his next bank heist. And this time he's thinking big-he's not just taking the loot, he's stealing the whole bank! Beset by a hapless crew, a lusty backer and an overzealous prison warden, Ballantine son discovers that when your getaway vehicle is the bank itself, it pays to be America's most driven criminal!