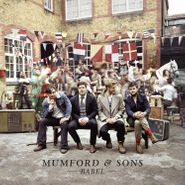 Mumford & Sons exploded into rock music in 2010 with an album that made huge sounds from small instruments, employing banjo, acoustic guitar, standup bass and other antiquated instrumentation to build stadium-folk that sounded like Fleet Foxes on creatine. It helps that they have gravelly voiced Marcus Mumford and his band backing him with manly harmonies like a bearded Monkees or Beach Boys at their most hirsute. On Babel, Mumford & Sons resist any sort of attempts at “modernizing” or overproducing their sound and instead stick with what works best for them, delivering song after song that roar and shuffle through passionate folk-inspired rock, starting with the booming title track, in which Mumford and co. sound like the Union Army (never mind that they’re British) booming onto the field with battle-cry vocals and cannon blasts of drums. On “I Will Wait,” Mumford & Sons sound like a folk version of U2, offering romantic declarations on a grandiose scale that would make the toughest lass blush. They sound just as good when they slow things down, as on the darker “Holland Road” or “Ghosts That We Knew,” laying their hearts bare in an elegiac fashion. Their heart-on-sleeve earnestness may not be cool, but let them in and Mumford & Sons will get to you. Spring for the bonus edition and you’ll get a cover of Paul Simon’s “The Boxer” featuring the man himself playing with the band, plus two more tracks.