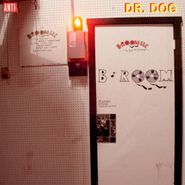 In the press material surrounding B-Room (Dr. Dog's 8th album since 2001 and its third for Anti), a lot of energy is spent describing the genesis of the album and therefore the genesis of the studio the band built to create it in. Presumably, this will not be the only album the band creates in this studio, but it will always be the album they created while building the studio. In an interview with Rolling Stone, they describe a commune-like environment where if you "dont wan't to do a guitar solo," you might sweep, or otherwise work on the maintenance or construction of the studio. This entanglement between the means by which an artist makes a work and the so-called Work Itself blurs the edges of that Work Itself, its edges seeping out further and further, raising questions about the nature of creative labor and the autonomy of so-called "Time Based" media.

Interesting stuff but what does this mean for the tunes, maaan? Well, first off, it sounds like a Dr. Dog record, which would appear to mean that this new studio was not designed to be a lab for mad science but rather to be a controlled area to refine the sound they've been refining for almost 15 years. For me, a hallmark of Dr. Dog's recorded output, especially recently, has been the space inherent in the music. Whether or not this is actually the case, the instrumental music has an air of same-room-recording with a hint of barn, a la a Nitzsche/Young collab or even The Basement Tapes. While Dr. Dog has, on this record and in the past, a healthy dose of that sort of loose-but-purposeful high-craft country rock (the record's centerpiece is a series of earnest and stripped down acoustic ballad-type things), there are also elements of classic soul and croon, as evidenced on the album's lead single "The Truth" and "Long Way Down," the latter of which has enough trudging and plopping horns and strange keyboards to make it sound like some mutant '60s soul anthem worthy of Fontella Bass. This sort of weird funk bleeds out through occasional Gainsbourg and Beefheart vibes, locking onto strange and occasionally dissonant grooves, riding them to their paranoid conclusion. The bargain bin keyboards and alien sound effects put the record in decidedly psychedelic territory, occasionally recalling a less abrasive Flaming Lips or a drunker, less intentionally arty Wilco circa Yankee Hotel Foxtrot had they both listened to early Dr. John more.

Given the nature of this album's creation and the spirited quality of its songwriting and performance, one can't help but think that this is the album Dr. Dog wanted to make. In other words, the space between their idea of the album and the album itself was shrunk, a one-to-one ratio map, the album is the idea and vice versa. This is a remarkable achievement for anyone in any art form and applied to a country-funk-psychedelic-rock record, it's all the more noble and impressive. Kudos.