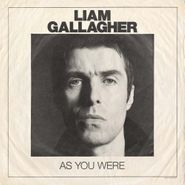 The Gallagher brothers spend so much time publicly feuding with each other it’s a wonder they get any music recorded at all. But since the dissolution of Oasis in 2009 (which honestly came a lot later than anyone could have predicted, given the two’s contentious history), both parties have stayed plenty busy: Noel with his High Flying Birds solo project and Liam’s since dissolved English rock supergroup Beady Eye. Until now, however, the 45-year old singer and younger Gallagher had yet to release a solo album. As You Were is a collection of tunes that play directly to Liam’s strengths (and uniquely reedy voice), so much so that parts of it could be mistaken as the Oasis of old. Amphetamine-enhanced Britpop rave ups, mellow Beatles-esque ballads, and stomping glam rock are the law of the land here. Listen to your elders, Arctic Monkeys, this is how it’s done.