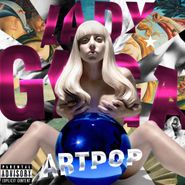 Sure, the costumes are amazing, but when is Lady Gaga’s music going to catch up to her outré public persona? ARTPOP aims to answer that question. From the get-go, ARTPOP is a stranger beast than her Eurodisco-foisting debut, the superior Fame Monster EP and its so-so follow-up, Born This Way. She made the insane “Aura” a single, with its Spaghetti Western riff, funhouse vocals and lack of discernable hooks, as if to prove this point. Yet plenty of ARTPOP also trades in the kind of hooky radio pop—and trendy genre hopping—she’s been known to employ. “Sexxx Dreams” is classic Gaga in the vein of “Paparrazi” and “Just Dance,” playing into Gaga’s ability to focus a singular idea into a dynamite pop song—in this case, the subject is clarified by the line: “when I lay in bed, I touch myself and think of you.” She rides EDM trends with the trapstep beats of “Jewels N’ Drugs,” featuring Too $hort and T.I., and puts out a laid-back pop/R&B single similar in character to Drake’s smash “Hold On, We’re Going Home” with “Do What U Want,” featuring none other than R. Kelly. At times ARTPOP is a bit scattershot, like she wanted to push the envelope while still ensuring she had enough hits to maintain relevancy, and you wish she would have pushed it further. But if it’s a sign of how strange Gaga is willing to move pop music down the line, let’s hope fans stay with her on ARTPOP, which just manages to have it both ways.


hermanlop
11/12/2013 Artpop is amazing and I am so happy that I finally got my copy from this amazing amoeba store. ♡ gagas music my favorite songs are "dope, gypsy, swine, venus, but love this album cause is different than all other gagas music.she is an amazing artist ♡♡♥♡♥♡♥♡♥♡♥♡♥♡♥♡♥♥ u gaga.