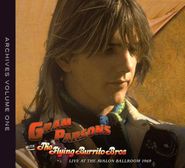 It’s difficult to describe the full impact The Gilded Palace of Sin, the Flying Burrito Brothers’ debut album, had on me in February 1969, when I came across a promotional copy of the A&M Records album as an 18-year-old college disc jockey.

Gram Parsons -- shaggy-haired and draped in a Western suit from Nudie’s of Hollywood festooned with marijuana leaves, pills, and naked women -- squinted out coolly from the record’s cover, looking glamorous, dangerous, and alien, a rock ‘n’ roller with attitude to burn in spangled country mufti. Inside was unprecedented music just as surprising as Parsons’ image - an amalgam of rock ‘n’ roll, country, and soul as exciting and mysterious as anything heard on the Band’s Music From Big Pink the previous year.

It would sell only an estimated 40,000 copies in its day, but for thoseof us who got tuned in early, The Gilded Palace of Sin was an event, and it remains so to this day. And it’s one that has served as a beacon for a couple of musical generations to follow.

Gram Parsons With the Flying Burrito Brothers Live at the Avalon Ballroom 1969, Amoeba Records' new two-disc set, is just as much of an event, to these ears. There have been numerous other live albums bearing the Burrito Brothers’ name, but this is the one to get. It’s the first legitimate issue of concert material - captured in two April nights at the titular venue -- by the group’s original touring lineup (featuring Parsons and including bassist Chris Ethridge, who departed the Burritos before 1969 was over). And - besides Sierra Records’ 1982 release of a Long Island radio performance by the Fallen Angels - it’s the only available full-length document of Parsons on stage, and here he’s in his prime. Additionally, the repertoire contains a brace of songs the Burritos never saw fit to cut in the studio, and includes a number of revelatory numbers.

The Avalon shows were the work of a very young band, little more than six months old. The Flying Burrito Brothers were formed by erstwhile Byrds bandmates Parsons and Chris Hillman after the latter left the Los Angeles group in September 1968. (Parsons had himself quit the Byrds earlier that year, ostensibly objecting to a tour of segregated South Africa, following the recording of the breakthrough country-rock album Sweetheart of the Rodeo, released that August.) Enlisting Ethridge and pedal steel guitarist Sneaky Pete Kleinow, the Burritos recorded their first album between November 1968 and January 1969 using several studio drummers. Former Byrds drummer Michael Clarke joined the band in time for its first road trip.

By the time they played the storied San Francisco rock ballroom, the Burritos were veterans of a chaotic first tour, romantically undertaken by train right after the release of Gilded Palace, and marred by messy drug-fueled shows in front of uncomprehending audiences and (anticipating the behavior of Parsons’ hero George Jones) a no-show at a prestigious New York showcase date. The trek inspired “The Train Song,” recorded as a single later in 1969 and possibly performed for the first time at the Avalon.

In San Francisco, the Burritos came to play, and they were lucky enough to open for the Grateful Dead, one of the Bay Area’s most beloved acts, and received an audibly enthusiastic welcome. (The story of how the tapes of these shows were liberated from the Dead’s vault for release by Amoeba is told elsewhere.) While the headlining act had always assimilated country and string-band roots into their trippy sound, it’s instructive to play the Burrito Brothers’ Avalon recordings back-to-back with Workingman’s Dead, the Dead’s first country-rock sortie, released 14 months later in June 1970. Listen to Jerry Garcia’s vocal on “High Time,” for instance: It’s obvious that the guitarist had paid attention to Gram’s similarly aching, vulnerable style.

Let me put it simply: Gram Parsons sings better on the Avalon recordings than he did on the majority of his studio sides. On both evenings, he hit his notes with bell-like clarity, and he sometimes took songs to their emotional limits. In particular, his versions of George Jones’ devastating “She Once Lived Here” and Bobby Bare’s dark “Long Black Limousine” - neither of which the Burritos cut in the studio -- raise the bar high. His voice retains the open, fragile quality that his fans adore, but he delivers with a focus and commitment he reached only on his supreme studio tracks.

As splendid as the front man’s performances are, special praise must be reserved for Sneaky Pete Kleinow. It was apparent from his fuzzed-out solo on “Christine’s Tune (Devil in Disguise),” the first track on Gilded Palace, that Kleinow - also well known as a “claymation” animator for Art Clokey’s Gumby TV show - was rewriting the book for pedal steel guitar (as Amoeba’s own steel guitar whiz Joe Goldmark would probably agree). His name deserves to be mentioned in the same breath as such innovators as Bob Dunn, the pioneering amplified steel maestro of Milton Brown’s ‘30s Western swing band the Musical Brownies, and the futuristic ‘50s studio aces Speedy West and Alvino Rey. As the band’s lead instrumentalist, Kleinow was able to segue effortlessly from sweet country-rooted comping to saber-toothed, aggressive distortion - check his antic playing on the Mel Tillis-penned “Mental Revenge,” virtually unrecognizable in the Burritos’ hands as Waylon Jennings’ loping 1967 hit. The hot picking on Live at the Avalon serves as a fitting memorial for Kleinow, who passed away in early 2007.

The set lists for the Avalon shows lend a deeper understanding of what Parsons was shooting for with his “Cosmic American Music” than the studio albums The Gilded Palace of Sin and Burrito Deluxe do. To be sure, there are rocked-up versions of exemplary honky-tonkers by Jones, Bare, and Buck Owens (“Close Up the Honky Tonks”). Hank Williams, a country institution but not yet a rock love object, gets his due with “You Win Again.” Fittingly, given their own gunslinging style, the band also shows a prophetic appreciation and understanding of country’s outlaws-to-be, covering both Jennings and - on a medley of “Undo the Right” and “Somebody’s Back in Town” - Willie Nelson, who at that point was still better known as a hit-making Nashville songwriter than as an artist in his own right and was years away from mass recognition and success.

But Parsons never envisioned himself as merely a straight-up country performer, and many of the other song choices bear out his intent. Essayed on separate evenings were “Dark End of the Street” and “Do Right Woman,” the Dan Penn-Chips Moman compositions - 1967 R&B chart entries for James Carr and Aretha Franklin, respectively - that anchored the first side of the Burritos’ debut LP as a kind of country-soul medley. “Lucille” is an interesting choice: a 1957 R&B hit for Little Richard, performed in the countrified close-harmony arrangement recorded by the Everly Brothers in 1960 with Willie Nelson’s pedal steel guitarist, “Mr. Country Soul,” Jimmy Day.

On both nights, the Burritos played “We’ve Got to Get Ourselves Together,” a song originated by Delaney and Bonnie Bramlett. Parsons knew the husband-and-wife team from the dives he haunted in the San Fernando Valley north of Los Angeles, where they performed with a band that included Leon Russell and other members of the so-called “Tulsa Mafia.” The Bramletts were attempting to forge a synthetic style of music not unlike what the Burritos were aiming for, but coming at it from a Southern-soul slant and not from country, and the cover of “Get Ourselves Together” makes the connection between the musicians’ objectives explicit.

In their short time - less than two years -- with Gram Parsons as their lead vocalist and theoretician, the Flying Burrito Brothers paved a path for others to follow; one of the earliest runs down that path can be heard brilliantly on Live at the Avalon Ballroom 1969. I personally know many musicians who continue to be inspired by the Burritos and Parsons. For instance, every time I hear my gifted L.A. friend Mike Stinson play, I’m reminded that it was Gram’s music that got Mike to hit the country-rock road. And when I see (can their handle be anything other than a homage?) the Hacienda Brothers -- a California/Arizona outfit that uses rockabilly guitar and pedal steel to hammer home songs by artists as varied as the Percy Sledge, Johnny Cash, Ivory Joe Hunter, the Box Tops, and Charlie Rich -- I know that the torchof Cosmic American Music continues to burn, brightly.