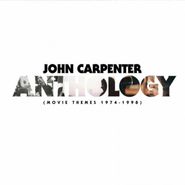 Anthology: Movie Themes 1974 - 1998 is a comprehensive, fascinating look back at legendary filmmaker and composer John Carpenter’s synth-driven soundtracks. The LP is more than just a “best of,” however; Carpenter has rerecorded these classic themes with assistance from the same crew he worked with on his recent Lost Themes release: his son Cody Carpenter and his godson Daniel Davies. Although the tracks always have that signature John Carpenter sound, there’s a fascinating variation between the works — from propulsive, synth-heavy numbers like his theme to “Halloween” to the spaced out, rock-influenced “Assault on Precinct 13.” This Anthology is a win not just for fan’s of Carpenter’s directing work but also for fans of moody, ‘80s style synth compositions.