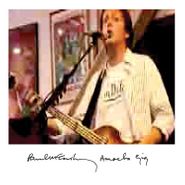 Paul McCartney's charismatic in-store performance at Amoeba Music in Hollywood on June 27, 2007 was a magical moment shared by the seven hundred lucky people who made it in, along with a handful of celebrities including Ringo Starr himself. For those who missed it – and for those who want to revisit it and reminisce - the full set is now available for the first time on CD, 2LP and indie exclusive clear/amber color double vinyl. The twenty songs include energetic renditions of hits from across McCartney's legendary career, such as “Drive My Car” and “Back In The U.S.S.R.,” as well as a solo acoustic version of “Here Today.” It's an absolute must-have for Beatles fans everywhere.