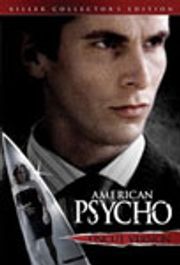 Based on the bestseller by Bret Easton Ellis, American Psycho tells the dark tale of sociopath Wall Street trader, Patrick Batemen’s (Bale) slide into insanity and an insatiable need to slaughter. Christian Bale provides a virtuoso performance that launched him as an adult leading man. From one moment to the next, he is distant and unreadable and on a dime, becomes manic and frenzied. He is both frightening and funny, which is always a great combination in an anti-hero. The character of Patrick Batemen could easily be interpreted as a metaphor for American society in the 1980s. In his greedy self-importance with little concept of morality, Batemen mirrors the cutthroat capitalistic attitude that defined that decade. It is in this world of appearance trumping substance, that a killer could roam free, even killing his own. Why? Because he is rich, handsome, and as vain as everyone else around him. The novel is perhaps the most gruesome, stomach turning work of fiction I have read. But delicate and acute direction by Mary Harron, manages to keep the wicked satire, vileness and vanity in tact, while scaling back the blood. She presents wonderfully twisted satire in such things as Batemen’s anal retentiveness and love of Phil Collins. While films like Henry: Portrait of a Serial Killer presents the world of a deranged serial murderer as a gritty and visceral thing, American Psycho captures the polish that hides evil just below a smooth surface. It is not only one of the more affective adaptations in recent cinema, but also a watershed mark in the serial killer genre. The film’s final message nails the loss of connection among people, when Batemen tries desperately to turn himself in. All he finds in return, from those around him, is hollow laughter of disbelief. And ultimately, this confession he has shared with us all, “has meant nothing.”