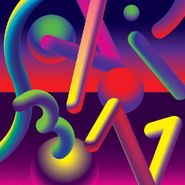 Spacemen 3’s Sonic Boom (Pete Kember) has released a new album of remixed tracks from his recent release, All Things Being Equal. The new version, Almost Nothing Is Nearly Enough, takes those droney, woozy, synth melodies and adds just a touch of late '70s/early '80s electro sounds. A song like “On a Summer’s Day” feels a little brighter here, invoking the twitchy melodies of a group like Animal Collective. The album also includes tracks only previously released in Japan, like the hypnotic and effervescent “Tick Tock.”