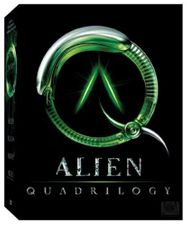 The Alien Quadrilogy is a nine-disc set containing the first four of the Alien films, a bonus disc for all four films, and a fifth bonus disc (ninth overall) with a few more extras. It's one of the most enormous digipacks we've ever seen, stretching more than five feet.