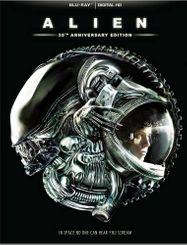 This Alien 35th Anniversary Limited Edition Set includes both the theatrical version and director's cut on Blu-ray, along with audio commentaries, deleted scenes and more - PLUS - a reprint of the original Alien illustrated comic and all-new, collectible art cards as a tribute to the late H.R. Giger, creator of the iconic movie monster that started it all.

When the crew of the space-tug Nostromo responds to a distress signal from a barren planet, they discover a mysterious life form that breeds within human hosts. The acid-blooded extraterrestrial proves to be the ultimate adversary as crew members battle to stay alive and prevent the deadly creature from reaching Earth. Directed by Ridley Scott and starring Sigourney Weaver in her breakout performance as Ripley, this legendary first film in the Alien saga will leave you breathless!