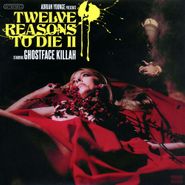 Wu-Tang Clan's Ghostface Killah and producer Adrian Younge deliver the second installment of their cinematic Twelve Reasons to Die series, and it's got more drama than your average summer blockbuster. A combination of voiceovers and lyrical content tell the story of black New York gangster Lester Kane, with Shakespearian levels of vengeance, star-crossed lovers, evocations of violence and resurrection. Raekwon provides the voice of Kane as Ghostface and others, including Vince Staples, Bilal, RZA, Lyrics Born and Scarub provide the narration. None of this would matter if the music itself wasn't as strong as it is. There's a full dedication to telling these stories, which can be a bit familiar, that comes through in the venomous spit on tracks like the Staples-starring "Get the Money" and creative cadences on "Death's Invitation." Composer Adrian Younge's score, full of horror movie organs, Blaxploitation basslines and Spaghetti Western orchestral touches, is as fun to get lost in as the script. Taken together, the Twelve Reasons to Die albums succeed as concept albums because of their easy-to-follow, singular subject matter and that the music doesn't suffer as a result of a weighty plot. Now someone call up Quentin Tarantino and let's get this thing made into a movie.