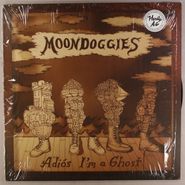 The Pacific Northwest’s Moondoggies straddle an interesting line. They’re harmonious enough to attract fans of their brethren in Fleet Foxes, yet they have the garage pop edge of, say, a Smith Westerns, along with the grandiose ambition of a folk-rock band like The Head and the Heart. Which begs the question: Can a band successfully appeal to such a wide variety of rock fan with one album? The answer is yes, with the band’s latest, Adios, I’m a Ghost. It’s a confident set of rootsy rockers, exemplified by the rollicking “Red Eye.” Moondoggies singer/guitarist Kevin Murphy has a romantic way about him — when he tells you “any lie will do” on the expansive and quite lovely “Midnight Owl,” you’re ready to believe anything he says, while his bandmates create an intoxicating shuffle and jangle. Adios, I’m a Ghost proves you really can provide something for everyone.