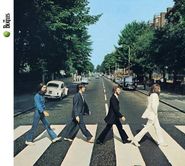 Abbey Road was the final album recorded by The Beatles, though Let It Be was the last they released. Even amidst one of the most impressive discographies in the history of music, Abbey Road remains one of The Beatles' best and well-loved LPs. Side one offers everything from the silly duo of Ringo-sung "Octopus's Garden" (a staple of children's music albums) and "Maxwell's Silver Hammer" to stoned rock classics "Come Together" and the epic "I Want You (She's So Heavy)." Peppered in with these are George Harrison's lovely ballad "Something," Paul McCartney's bluesy "Oh! Darling." Side two begins with Harrison's gentle classic, "Here Comes the Sun," followed by The Beatles' greatest collective vocal achievement, "Because," which features gorgeous three-part harmony throughout. The rest of the LP is a medley of mostly short cuts, as if the band had patched together whatever songwriting remnants they had lying around. Rather than sounding thrown together, however, the great ideas flow seamlessly together. Paul's excellent "You Never Give Me Your Money" segues into a trio of stylistically John Lennon tracks, which then cede to four more McCartney songs, ending, appropriately, with "The End." But wait … a happy mixing accident left the brief ditty "Her Majesty" spliced onto the master reel, providing a funny coda to an album filled with strange, often humorous lyrics, as well as some of the catchiest tunes The Beatles ever wrote.