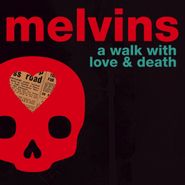 The Melvins don't take it easy. And I'm not talking musically, though they definitely don't take it easy on that front. But they're not known for taking much time off. Between albums, side projects, EPs and other odds and ends, the Melvins are among the most prolific bands of the last 50 years. So it's almost a shock that their newest release is their first double-album - it's both an original studio album and a soundtrack for a new film. Split beautifully between love and death, their latest is pure psychedelic frenzy made for fans of the freaked out Japanese psych scene of the '90s and the angry noise rock of the '80s. If "What's Wrong With You?" was recorded with old mics and into quarter-inch magnetic tape, the song could've come right out of the bad vibes of 1969. It has the energy of MC5, but a post-modernist, ironic streak that's classic Melvins. The lyrics are bitter, but surprisingly funny and always far from mean-spirited. The heavy "Christ Hammer" thuds along in a way that's closer to their metal and grunge roots. The vocals chant with layers of distorted audio that sound like the voices are fortresses made of stone. It's heavy and poetically impenetrable, but the riff is catchy enough to cross over to normies unaccustomed to Melvins' level of experimentation. The show stopping solo toward the end might be the best part as the song catches on fire with distortion and feedback that would make Japanese rockers High Rise blush. A Walk With Love & Death sees Melvins at their most ambitious, and it works. It never feels like they stumble. Instead the deliver a real rock album in a sea of mediocre, soulless, and half-hearted efforts.