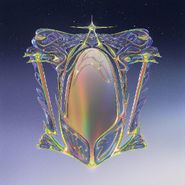 Travis Stewart (aka Machinedrum) meshes R&B and eclectic IDM for A View of U, his follow-up to 2016's Human Energy, especially on the banger "Kane Train (feat. Freddie Gibbs)" and the smooth "Spin Blocks (feat. Father)." Armenian jazz guitarist Tigran Hamasyan adds a different flavor to "Sleepy Pietro" on this star-studded ninth solo album from Stewart, whose projects include JETS, Sepalcure and Dream Continuum. It's an atmosphere-heavy ride.