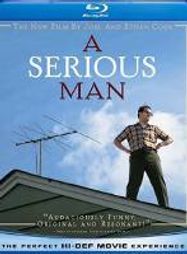 Academy Award®-winning directors Joel and Ethan Coen return to their comedy roots with this original and darkly humorous story about one ordinary man’s quest to become a serious man. Physics professor Larry Gopnik (Michael Stuhlbarg) can’t believe his life: His wife is leaving him for his best friend, his unemployed brother won’t move off the couch, someone is threatening his career, his kids are a mystery and his neighbor is tormenting him by sunbathing nude. Struggling to make sense of it all, Larry consults three different rabbis and their answers lead him on a twisted journey of faith, family, delinquent behavior and mortality in the film critics rave is “seriously awesome!” (Michael Hogan, Vanity Fair) "Sy Ableman is your new father, America!" (Rex Reed, At The Movies)