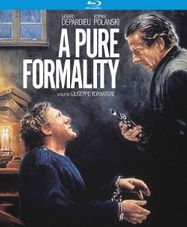 From Giuseppe Tornatore, the acclaimed director of Cinema Paradiso, The Legend of 1900, The Best Offer and Malena, comes this dark and mysterious thriller with top-notch performances by Gérard Depardieu (Buffet Froid, Green Card) and Roman Polanski (The Fearless Vampire Killers, A Generation). Onoff (Depardieu) is a famed author who hasn’t published anything in years and has become a recluse. One rainy night, he is picked up by the police, who find him running across the French countryside in the rain, breathless, without any identification and apparently suffering from short-term memory loss. A murder has been committed in the nearby woods, and suspecting Onoff’s involvement, the authorities detain him at a dark, leaky command post to await the arrival of the Inspector (Polanski), who’s ironically a fan of Onoff’s work. Through painstaking interrogatory dialectic, the Inspector delves into Onoff’s mind, and brings the writer to a new and unexpected realization. Music by legendary maestro Ennio Morricone (The Good, the Bad and the Ugly, The Sicilian Clan).