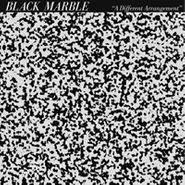 I am a big fan of the label Hardly Art. But this is not the kind of album they usually release. Dreamy and dark coldwave. They are from Brooklyn of course. They could easily be on Captured Tracks.

It’s safe to say that if you like minimal/dark wave, you’re going to like Black Marble. The Brooklyn duo’s debut record hits all the right spots — deeply intoned vocals, notable for their smoothness and fullness here, over tinny drum machines and analog synth delights. “Cruel Summer,” the album’s opener, is a fine example of how much energy they can build through carefully layering their minimalistic set-up. It’s sort of a perfect summer comedown for this first week where it truly feels like fall. “MSQ No Extra” sounds like a takeout food order instruction, but its pulse and Cure-style bassline serve as guides through a spectral synth grid that makes the whole thing feel like a seemingly endless city night. The duo doesn’t add much to pretty well-worn territory — everything’s pretty on-the-nose, right down to ’80s-sounding song titles like “A Great Design” and “A Different Arrangement” — but as far as modern bands go who re-create a then-overlooked and now much-beloved sound, Black Marble is as good as it gets.