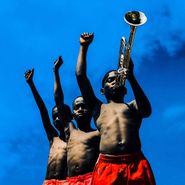 Common's new album, A Beautiful Revolution Pt. 1, kicks off with poet Jessica Care Moore's voice commanding your attention on the serene "Intro" and wraps up with multiple speakers discussing the concept of the album title on the equally sweet-toned "Outro." In between, the funky, shuffling single "Say Peace feat. Black Thought" is a standout track that embodies the message of the album. "Fallin'" with its head-bobbing, jazzy groove addresses racism and police violence, "A Riot In My Mind" - a melding of jazz guitar, rock and hiphop - reminds us that "It's a war outside...nation against nation." This is an eclectic, artistic set of socially conscious alt-rap.