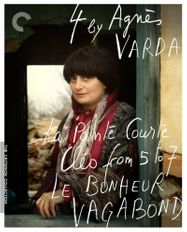 Agnès Varda used the skills she honed early in her career as a photographer to create some of the most nuanced, thought-provoking films of the past fifty years. She is widely believed to have presaged the French new wave with her first film, La Pointe Courte, long before creating one of the movement's benchmarks, Cléo from 5 to 7 (Cléo de 5 à 7). Later, with Le bonheur and Vagabond (Sans toit ni loi), Varda further shook up art-house audiences, challenging bourgeois codes with her inscrutable characters and offering effortlessly beautiful compositions and editing. Now working largely as a documentarian, Varda remains one of the essential cinematic poets of our time and a true visionary.