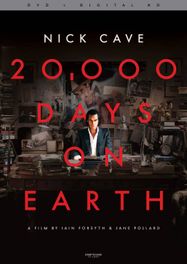 20,000 Days On Earth is an inventive, lyrical ode to creativity and an intimate examination of the artistic process of musician and cultural icon Nick Cave. Directors Iain Forsyth & Jane Pollard fuse drama and documentary, weaving a staged day in Cave's life with never-before-seen verité observation of his creative cycle. It features those who have affected his life, including wry tales from the road shared with his regular collaborator, the multi-instrumentalist Warren Ellis; actor and friend Ray Winstone; and Kylie Minogue, who shared a duet with Cave in the breakout hit "Where the Wild Roses Grow."

Neither a music documentary nor a concert film, 20,000 Days On Earth still contains electrifying performances. This category-defying film pushes the form into new territory, exploring universal themes about artistry, and celebrating the transformative power of the creative spirit.