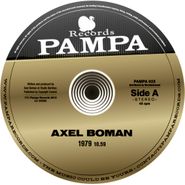 Axel Boman is also a consistently fun and eccentric producer, and his latest, this two-tracker called, '1979', is both of those things! On the A-side we get some beautiful Far-Eastern pizzicato motifs mixed with a romantic house style, while the flip offers an organic, Latin-inflected percussive workout laced with these crazy soaring pitch-bends. This is his return to DJ Koze's Pampa label. His last effort for Pampa was 2010's 'Holy Love' which you probably remember for its megahit "Purple Drank".